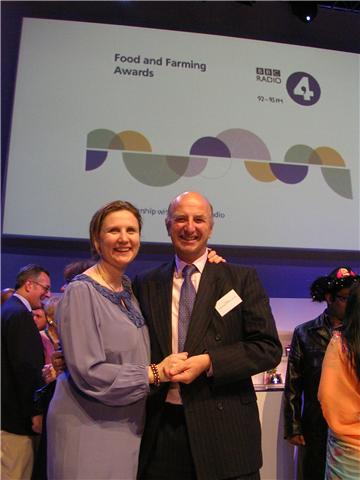 Described by Jamie Oliver as the “Oscars of the food world”, the awards were created in 2000 to celebrate the people and organisations that produce and promote the best of British food.

Chair of judges Angela Hartnett (shown standing next to Richard) says: “This is a really inspirational group of finalists and what’s so important about the awards is that, for many of them, making it on to this list will be the first time they’ve had their work recognised.

“When you hear their stories it makes you appreciate the impact dinner ladies, producers, cooks and retailers all over the country are having on the food we eat.”

Huntsham Court Farm was nominated and shortlisted for the category of ‘Best Food Producer‘ along with two other producers. Whilst we did not win, we were honoured that our meat was considered to be some of the best in the country.

Thanks to all of you who nominated and voted for us.

“We are blessed to have such a unique ingredient in the Lecture Room kitchen. The flavour & quality of Huntsham Farm’s aged Middle White pork is like no other and we are proud to serve this on our a la carte menu”